The Spanish refrigeration association (AEFYT) has appealed to the Spanish government over HFC taxes. Furthermore warning of a refrigerant gas shortage that could become critical. Refrigerants 507 and 404A may well disappear by 2018 as a result of the imbalance caused by The European F-gas regulations. AEFYT Spokes person Roberto Solsona commented that the situation is likely to move from serious to critical. The additional operational costs compounded by the refrigerant shortage disrupts key economic sectors. These include but not restricted to food distribution and the restaurant and hospitality industry. 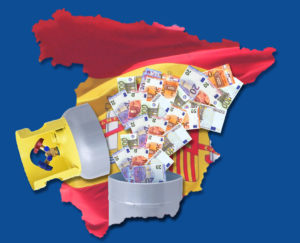 Germany sought urgent debate with the German government. The associations warned the refrigerant gas shortage would seriously impact hospitality, food retail and the brewery trade. Moreover and critically hospitals, medical supplies and blood banks. AEFYT is further concerned the imposition of taxes compounds the situation together with a blight on the free market principle. The organisation has pointed out that the onerous tax burden has fuelled the black market. The knock on effect is seen as a refrigerant gas shortage has fuelled the black market. The organisation proposes a cut to the current 85% levy along with further reductions re: recovered refrigerant.

In 2014 a 33% tax was brought in and was provisionally set to rise to 100%. However this tax was frozen in 2016 at 66% and at the time a reduction back to the 33% rate considered. The industry was and still is suffering from a parallel black market as a result of the tax. An AEFYT spokesperson spoke of his frustration when illustrating that the tax was up to eight fold the value of the refrigerant itself. In 2016 the tax added approximately €50 a kg to R404A (high GWP). The AEFYT also has wide support from those end users, such as food distribution, that are suffering due to costs being passed on.

The tax would appear to be a burden of some disparity when compared to other European Union countries. This is also seen as an unfair level of taxation given the weather extremes in Spain. Denmark also are subject to the taxation but has a more temperate climate with cool average Summer temperatures of around 18c. Whereas in Spain some areas such as Madrid and Bilbao can be described as moderate there are extremes. In the Levante and Andalucía temperatures in Summer can reach in excess of 40c in the shade. Therefore cooling requirements and the demand for cooling and air conditioning in Spain is far greater than in Northern and Central Europe.

Decision by France Not To Implement Tax

More notably Slovenia and Australia have rebuked the tax while France took the decision not to implement it. While the objective of the tax is to reduce emissions they argue that this is already covered by F-gas regulations.  Any tax should be unilateral across the EU and should not disproportionately affect one member country. Thereafter in 2017 AEFYT took things further and complained to the EU over the tax. The tax was detailed under the acronym IGFEL by the Ministry of Finance and Public Services. The complaint cited that the tax violated European Union Legislation. Furthermore the disparity it created between other EU member countries and Spanish companies.

The association claimed it was a breach of the treaty (functioning of the EU). Article 26 was specifically noted which lays down the obligations to ensure function of the single market. Spanish distributors of fluorinated refrigerants have witnessed a 50% loss in sales across the Spanish market. Due largely to the import of refrigerants from EU states France, Portugal and Italy where there is no such taxation. Moreover no corresponding refrigerant gas shortage. The black market at the time for refrigerants was also estimated to be in the region of 3,000-4,000 tonnes. Given the maximum tax rate ceiling is up around €100/kg it further encourages tax fraud.

There would also appear to be conflicts to the F-gas regulations. While the black market fuels illicit entry CO2 emissions can neither be policed. This eliminates any perceived environmental benefits of the tax. In respect of F-gas the illegal market also can not be accountable for leakage and/or refrigerant recovery. In early 2020 Spain committed to mandatory training for engineers in the safe handling of alternative refrigerants. This was EU funded in recognition of  an EU member state tackling more sustainable industry options. In February of this year Spain required all technicians complete a minimum 6 hours training in the use of alternative refrigerants.

The EU incentive ‘REAL Alternatives 4 LIFE’ project commented that the legislation needed support to deliver sufficient training. It is estimated around 30% of engineers in Spain have achieved the training to date. There has also been substantial interest in two further courses on the use of CO2 and lower flammability gases. Refrigerants with lower flammability such as ammonia, CO2 and A2Ls are put forward as important options and alternatives in guiding the EU and UK away from higher GWP refrigerants. It is estimated there are around 15,000 technicians in Spain.

There has been keen interest and uptake in the REAL Alternatives 4 LIFE programme. Especially two courses on the use of lower flammability gas and CO2. The courses are provided by 5 official training bodies. Refrigerants such as CO2, ammonia and A2Ls (with lower flammability) are viewed as important options and alternatives. This initiative supporting the UK and EU to transition away from High GWP refrigerants a s prescribed under F-Gas regulation. The imminent implementation of hydro carbons within the industry will also see an end to a refrigerant gas shortage and the corresponding black market.
First Posted November 2017: