Craft brew shandy (Radler) has enjoyed a successful resurgence and a refreshing twist to it’s predecessors. As the easing of lockdown looms and the feelgood Euros fuels the increasing popularity of ‘nolo’ beers and wines. Low alcohol shandy sales are substantially up (50%) on this time last year confirming it’s continued momentum. When England score don’t be surprised if you’re showered with craft brew shandy. The popularity and interest in Shandy is on a par with the glorious summer of 76. With the craft brewery industry now embracing shandy this further gives the drink serious credibility.

Often frowned upon back in the 70’s the market seen as those more in their formative years. Compounded by the old school purists thinking that adding lemonade to beer was just plain wrong. The alcohol content (ABV) of  these drinks around 0.5% lent itself more to a soft drink though. However regulation in the UK has since been replaced with non binding guidelines. The ABV of 0.5% is now not not classed as “Alcohol“. What brewers have also wrestled with in the past is that the process of removing alcohol also removes aroma and flavour.

This may well account for the blandness and sickly sweet shandies of yesteryear exacerbated by additives. The dismissive culture over shandy was compounded by the glut of ‘low alcohol’ drinks in the 80’s. From Kaliber to Shandy Bass and other such earthly delights as White Lightning, Snowball and Babycham. It’s also impossible to forget the direct assault on underage drinkers by Hooch and the advent of ‘AlcoPops’. Thankfully the craft brewery industry now cater to a more discerning palette. If you want to keep the conversation flowing think nolo. 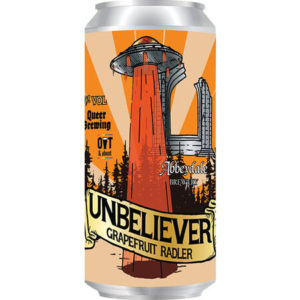 Low alcohol today does not, by default, come with a stigma or the party pooper tag. Sales exceeding £200m confirm a more moderate and teetotal attitude to socialising. Examples of two quality Craft brewery efforts are a Radler (Unbeliever Grapefruit Radler) at 3% ABV and an IPA Shandy at 2.8% ABV. These are produced by Abbeydale Brewery and Shandy Shack respectively. Is there also a conscious shift towards ‘responsible’ drinking? by choice socialising can be a positive, rewarding and celebratory experience. We are defined by choices. Craft brew shandy and radlers have a satisfying and irresistible taste. Shandy has always been synonymous with ‘Thirst Quenching’ and this terminology is what marketing relied upon.

Why is Shandy also referred to as ‘Radler’

In turn this is where the term ‘Radler’ derived from, many unaware of it’s origins. Radler is attributed to Franz Kugler, a 1920’s Bavarian Innkeeper. After travelling across the Bavarian countryside a large number of parched and exhausted cyclists arrived at Franz’s tavern. However Franz quickly realized that he would not have enough beer to go round and needed to get creative. He therefore added lemonade to his barrels in order to serve everyone. Franz called his new creation a “Radler” which is German for “Cyclist”. It’s not clear if Franz offered a discount to the cyclists for his ‘watered down’ beer.

Most popular radlers in Germany come with a shot of lemon or raspberry syrup. Is the revival of shandy also attributable to good old fashioned nostalgia. The smell and aroma triggering our senses and taking us back. The craft brewer has a wealth of modern processing techniques and tools at their disposal. Craft brew shandy blends are a whole new fragrant world and ripe for experimentation. This will undoubtedly encourage the revival unabated. The fragrance, innocence and humble charm of the drink contributes to its overall positive comeback.

The shandy/radler is also perfect for light and occasional drinkers. Will the resurgent shandy also be the go to for Friday after work drinks and BBQ’s. To make it personal and unique, many drinkers choose to experiment and personalise their Shandy. Light lagers, Wheat beer and a hoppy IPA make for the best shandies. Proportions can of course vary and will be down to personal preference ie perhaps less lemonade with a wheat beer and more with an IPA/Light lager. With that, here are a few home grown favourite recipes:

For this why not try home made Lemonade? Very simple and made with Sugar, water and lemons, more natural and refreshing. Firstly make your syrup comprising 2 cups of water and sugar then add to a saucepan. Juice the lemons and filter in to a container/pitcher. Add the syrup to the lemon juice thereafter add water for the desired sweetness. Proportionately add 50/50 with your wheat beer or IPA but experiment with ratios to your desired taste.

Water melon is synonymous with Summer and you’ll love the colour. All measurements can be doubled up or x 4/8 and so on. You will need 4 ounces of lemonade either quality shop bought or home made as per Lemon Summer Shandy. Fresh water melon juice (4 ozs) and anywhere between 8 to 12 ozs of your favourite IPA or wheat beer. Water melon should ideally be seedless (baby) but if you don’t mind putting the effort in dice and de seed a larger water melon. To make the water melon juice put all the fruit in to a blender until pureed. Pour over a fine sieve/mesh in to a bowl/measuring glass and chill. This shandy is enhanced with the natural sweetness of water melon. Add 50/50 or as preferred.

If you want to add a little challenge with your shandy, then this flavour is for you. It might be surprising that drinkers (shandy/craft beer) will enjoy a tropical fruit like pineapple with pepper and jalapeño, but it works! Deviating slightly a shot (1oz) of tequila is required along with 2ozs of Pineapple juice. Prepare 1/2 ounce of freshly squeezed lemon juice and 1/2 oz of Jalapeno syrup. Add 6>8ozs of IPA for a real craft brew shandy. Combine the fruit juices, jalapeno syrup and tequila in a pint glass. Add the IPA and ice if desired but if your beer and mix are chilled there is no real need for ice. Pour the beer slowly as the foam head interacts with the pineapple juice. Jalapeno syrup is very easy to make along with fresh lemon juice.